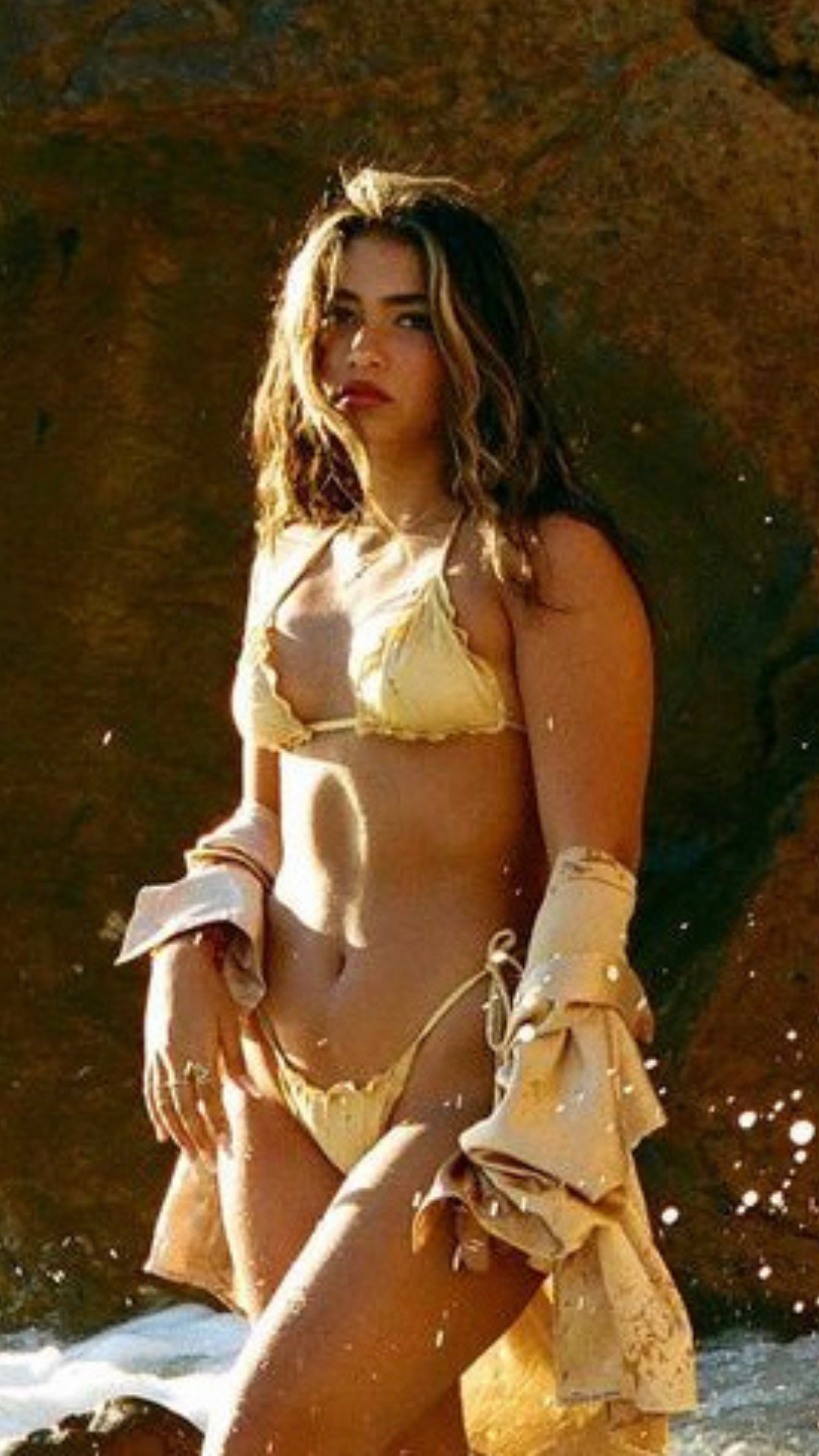 This week, my parents and I drove to my lawyer’s office in Los Angeles. I sat down with the members of the BFFs Podcast, as well as my attorney and a video forensics expert, to share some important information.

Over the last month, some people have speculated as to why I’ve turned comments off across my social media platforms, why I haven’t been posting, why I released an op-ed/blog rather than a video, and so on. I know a lot of people are wondering, “Why a podcast? Why now?” The answer is that I wanted an opportunity to have a conversation, to be asked hard questions and to answer them. The claims against me were originally made when I was 17 (about a time when I was 16), and I was, and am still not, equipped to discuss them with the level of expertise and care they require, which is why I brought professionals with me to do so. 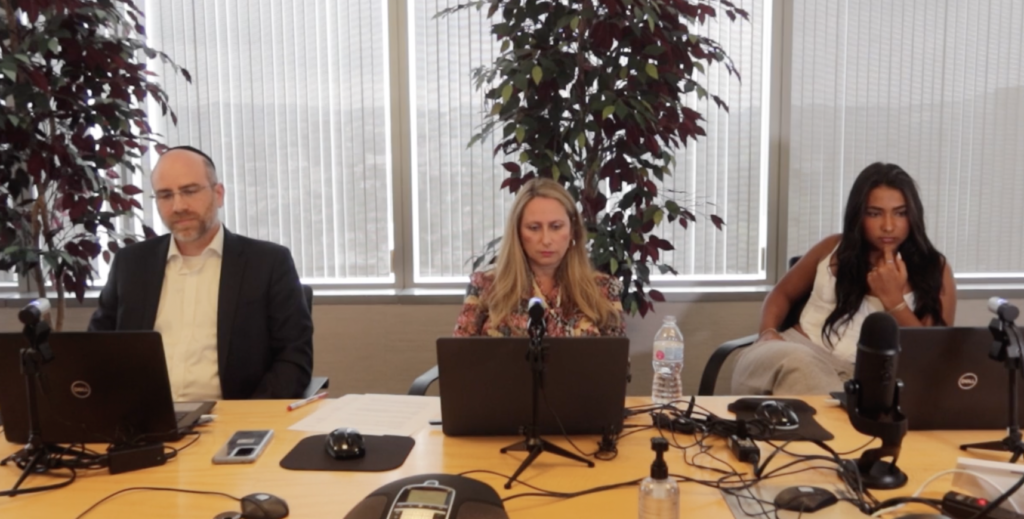 I have always wanted adults in the room to handle this situation, and have never wanted it to play out on social media. Since that choice was made for me, I decided to bring the adult professionals with me so they could could share FACTS about the situation (like how the video that some people claim is “proof” is not considered credible evidence and how just because stuff is said about you on the internet doesn’t make it true; what’s true is the law) and so that I could talk about how I have felt through this experience. I’ve felt grief and betrayal. More than that though, I’ve felt hopeless. Hopeless because in the midst of this grief, betrayal, and pain, my family, my friends and supporters and I have all been-and continue to be-viciously bullied online. From DMs and emails to me; to entire accounts dedicated to posting hate about me; to hate comments and attacks on people who express their support. All of this hate being driven based on words said and made online, not based on facts or evidence.

TRIGGER WARNING: The following images depict severe cyberbullying that could be triggering to some viewers. These images include use of inappropriate and hateful language, and we encourage younger readers to consult a parent or guardian before proceeding. *THESE ARE JUST A FEW OF THE THOUSANDS OF COMMENTS, ETC. THAT I’VE RECEIVED.* 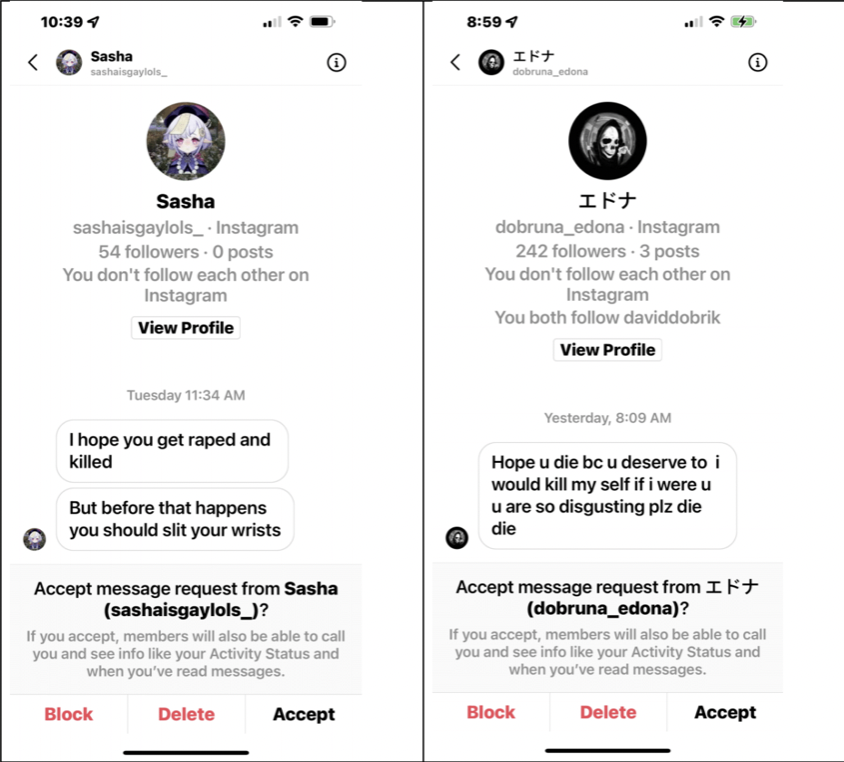 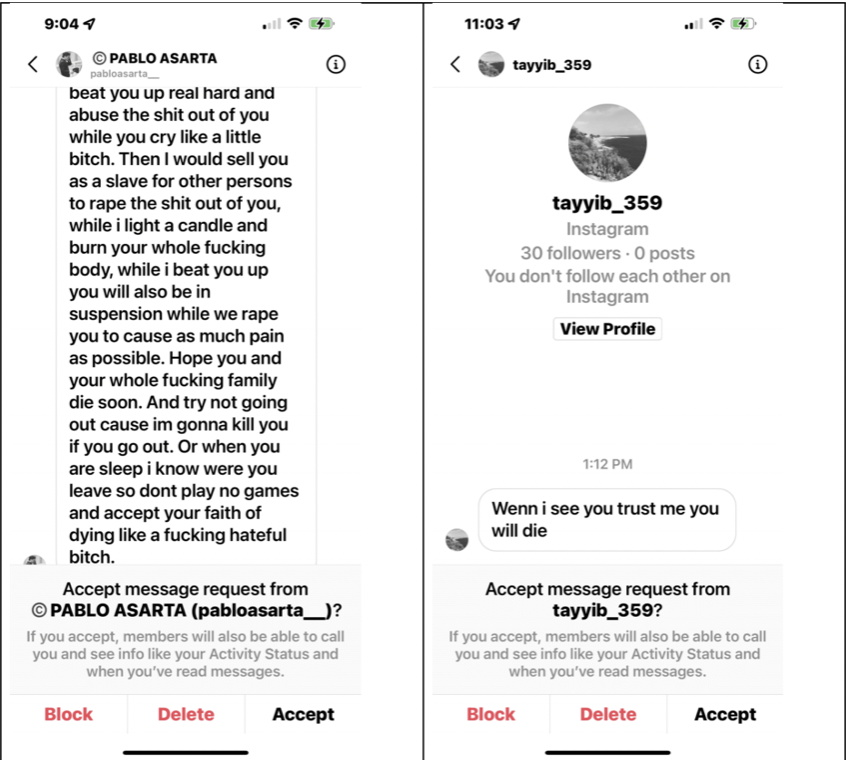 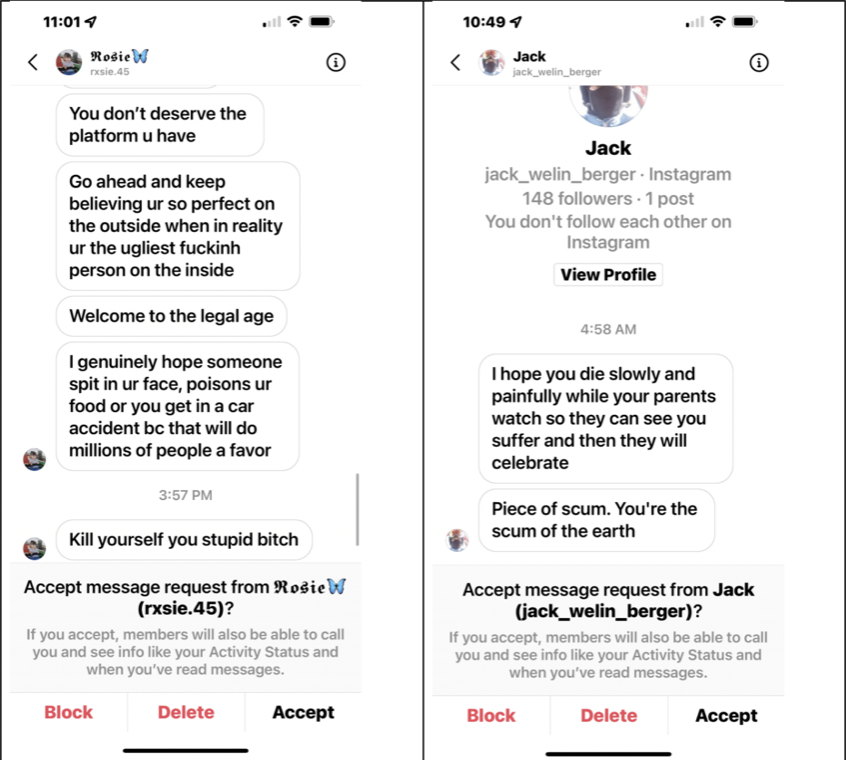 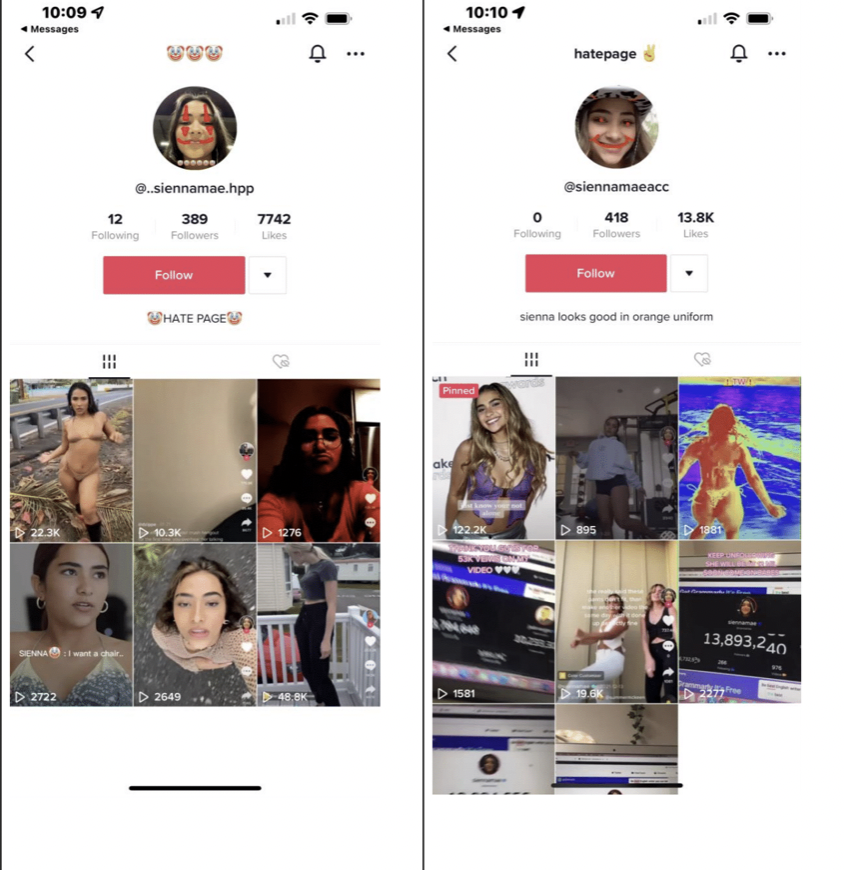 In January, after Jack released his YouTube video about me, the comments across social media got worse, much worse. People were telling me to kill myself, to die, to get off the internet and never come back. So to save my own mental health, I turned off my comments and then deleted social media apps off my phone.

Meanwhile, my team was trying to figure out how thousands upon thousands of people were commenting very similar phrases in record speed, specifically under Jack’s Youtube video.

A team from the prestigious Alix Partners – who have more than 60 years of combined cybersecurity, technology, and investigative experience with the FBI, US military, and other government agencies as well as the private sector – looked into how so many new accounts were popping up at insane speeds and all commenting the same hateful things about me under one video. What they found was both clarifying and scary.

They found that a bot is engaging in a malicious social media campaign against me, and that someone paid money to attach what is called a “master bot” to me to sway public opinion about my character using triggering words. What this means is that any time content is posted by me or about me, this master bot not only knows, but dispatches a high volume of bots that are pre-programmed with hate messages to engage in the comments as if they’re real people (oh, and create new fake accounts to comment hate). As an example, if you’re looking at the comments on the BFFs Youtube podcast with me, I’m sure you’ll see a ton of hate, driven by paid bots.

Of more than 1,100 randomly sampled comments on Jack’s video, Alix Partners found that the average time that these accounts were created, and then commented, was just 58 seconds. Clearly, not enough time to watch the whole video. 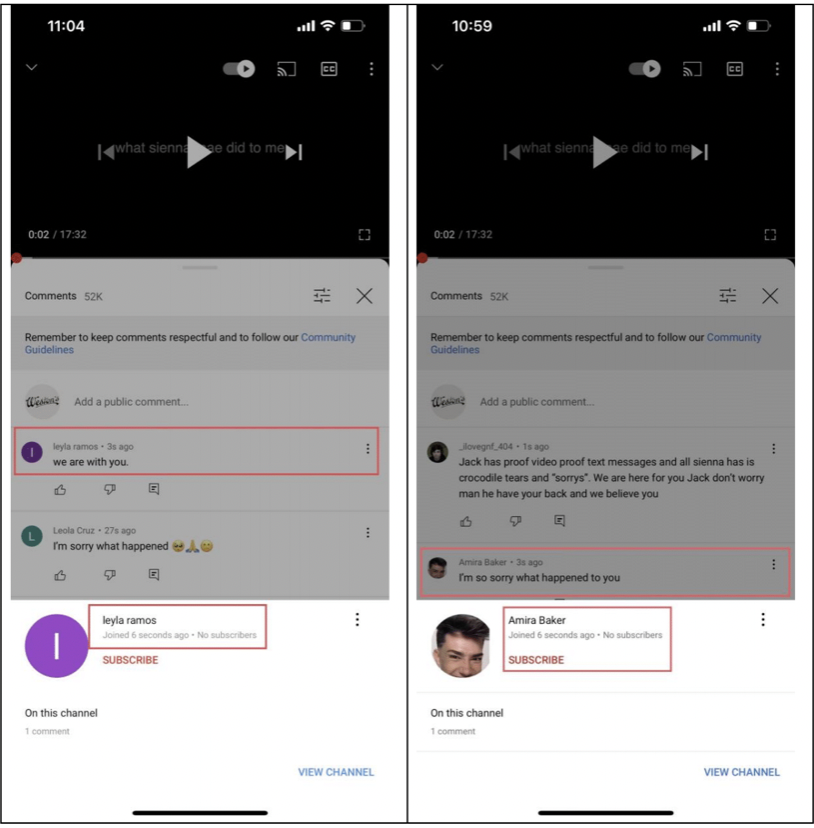 The team is actively investigating who is behind the bot and when the investigation is done, as my lawyer said on the podcast, we are considering all legal action. Cyberbullying is not just wrong, it is also illegal.

Reminder: The Internet is Not Real

As an 18 year old girl who originally started sharing online as a way to make people laugh and to feel less alone myself, I’m sad that the internet can be manipulated this way. And I’ve realized for the first time that this isn’t just some kids online being haters any longer. It’s much darker than that.

What has this taught me? First and foremost, the internet is not real. It is troubling that social media can so easily be used to create and fuel narratives by fake accounts and fake comments. It’s like a snowball – the bots roll in and post the same hateful comments over and over and herd mentality kicks in; people see how others are reacting and adopt those opinions, too. Where they think they are finding community, people are actually being exploited. In this case, at my expense.

Another thing I learned is how powerful a kind word can be. To everyone who has sent messages, emails, etc. letting me know that you’re with me and miss me, thank you. In a dark sea of death threats, violence, and really terrible correspondence, your kindness has been the light we needed to push forward to find the truth.

After filming the podcast, my parents and I walked across the street to grab a smoothie. The three of us could feel someone staring at us, and my mom started getting nervous when she saw a girl in her early 20s moving toward us. Normally, all of us would be excited to talk to someone who recognized me, but with everything going on, we didn’t know what to expect. We were all relieved when she asked me if she could give me a hug.

Her name was Jolene, and she was so kind. She told me she and her friends were with me, missed me, and appreciated the way that I make them all feel more comfortable in their bodies and in their own skin. She also reminded me that I had people in my corner and that in the end, I would only be stronger. Jolene, if you’re reading this, I want to thank you for taking the time to be kind to me. You reminded me of why I started creating in the first place, and why I will continue to do so.

I will return to social media when I’m ready. Instead of continuing to address the situation or the people who have chosen to bully me in someone else’s name, I’m filling myself up in real life with people and places that are important to me on a spiritual and emotional level. I want to eventually go back online for people like Jolene, who want to be gracious to each other and make themselves better. Because that’s all I want to do too.

When I do return, online bullying of me or people in my comments won’t be tolerated. I will not be ashamed of moderating my content in the name of creating a safe space for myself and others, nor will I shy away from removing people (and bots) who want to air their hate on my pages.

If you’re an online bully (and an actual person vs. a bot), I want to challenge you to think critically about what you’re saying; does it change anything for the better? Are you forming this opinion based on what someone else is saying? Or based on facts and evidence? Are you hating just because other people are? Does it make you feel better?

If you’re being bullied online, I want to encourage you to remember that in real life, you have people who love you, accept you, and cherish you – and real life is way more important than anything online. The internet is a weird and twisted place and sometimes people gang up against a shared enemy to feel less alone—even if that enemy isn’t really an enemy at all. Get outside in nature, spend time with people you love, and breathe. There’s no sense in caring about keyboard warriors (real or paid for) who likely don’t know the real you.

Cyber-bullying has become a very real, almost normalized thing today and it’s just so wrong. From the suicide death of our 2019 Miss USA Cheslie Kryst, to the Bot Sentinel report about the hate campaign against Meghan Markle, to the defamation lawsuit just won by CardiB against a YouTuber for cyberbullying her, we all have to wake up to what’s really happening online. After being on the receiving end of some of the most horrific hate, over a situation brought solely to the internet, I just want to help others. I’m figuring out the best way to do that and will keep you posted. Until then, I encourage you to lead with love and kindness.