MY PERSONAL GROWTH ON VIDEO

FACING MY FEAR OF CHANGE 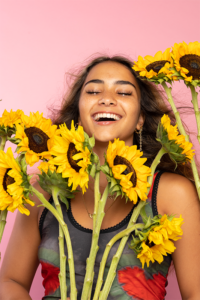 Sienna Mae Gomez, 17, was born in California where she grew up dancing, singing, and performing. At sixteen, she, with the rest of the world, downloaded TikTok and posted her first video. She soon became an internet favorite among young girls for her focus on body confidence, creativity, and fun content. Since then, she has garnered a collective following of over twenty-four million followers and subscribers, was featured in a music video trilogy alongside Becky G, Julia Michaels and Khea, hosted a music awards show starring Lil Nas X, 24kGoldn and other artists, and has partnered with some of the world’s most beloved brands, including Maybelline, IPSY, Levis, Aerie, Reebok and Grubhub, to name a few. She has appeared in Access Hollywood, Elle Magazine Mexico, Buzzfeed, and more for her inspirational entrepreneurship and dedication to promoting self love. Beyond all else, Sienna is a creative, loving, and energetic young woman whose main goal is to show the world her heart for performance, art, and community.